“the BRI will benefit many countries that need more and better infrastructure. It is also compatible with keeping the regional architecture and international system open and inclusive …. Singapore will continue to support China’s constructive participation in the regional architecture as well as the international system.” (PM Lee Hsien Loong, People’s Daily, 6 April 2018).

Following the success of inaugural HCS Internationalisation Forum in 2016, HCS will be organising the Belt and Road Initiative Forum (BRIF) on 4 May 2018 as a platform for businesses to establish their bearings in the context of BRI, explore potential projects and collaboration, and develop appropriate strategies and approaches for overseas expansion. In line with the Singapore Government’s intent to position Singapore as a key interlocutor for BRI, and to continue the momentum for Singapore companies to succeed in overseas ventures, the theme of the BRIF2018 is “Belt and Road: Opportunities and Networking Enabler (一带一路会议：机遇与关系网的桥梁)”

Sim Ann was educated at the Hwa Chong Junior College from 1992 to 1993. In 1997, she obtained a B.A (Honours) from Oxford University , where she had studied since 1994. She was awarded an M.A from Stanford University in 2009. Sim Ann also has a Post Graduate Diploma from the Nanyang Technological University. Sim Ann started her career in 1998 as an Assistant Director for Finance Policy and Planning at the Ministry of Health. From 2000 to 2003, she worked at the Ministry of Home Affairs as an Assistant Director for Implementation Planning, before moving to the Ministry of Trade and Industry, where she was Deputy Director for Trade until 2006. Between 2007 and 2009, she was the Regional Director (East China) for IE Singapore and in 2009, she became the Director for the National Population Secretariat until she left the Civil Service in 2011.

Sim Ann first stepped into the political arena in the 2011 General Elections when she contested in the Holland-Bukit Timah GRC as one of the four-member PAP team led by incumbent Minister for Environment and Water Resources, Dr Vivian Balakrishnan. The other PAP members are Christopher de Souza and Liang Eng Hwa. She is currently the MP for the Holland-Bukit Timah GRC.

HOW CAN YOU BENEFIT FROM THE FORUM?

Business owners, Entrepreneurs, C-suite leaders, Vice Presidents, Directors and Functional Managers of companies who are interested to venture abroad, planning to internationalise or are already working on overseas projects.

PROGRAMME AT A GLANCE

30% of China’s Belt and Road investments globally are in Singapore. Currently, 60% of ASEAN project finance transactions are led by Singapore-based banks. Singapore and China have agreed on three areas of cooperation in the BRI: infrastructural connectivity, financial connectivity and third-country collaboration. Singapore and China have also committed to augmenting economic cooperation and deepening two-way investment ties, including an upgrade of the China-Singapore FTA. In addition, there will be greater access as a result of Singapore’s new FTA with Sri Lanka and the Comprehensive and Progressive Agreement for Trans-Pacific Partnership (CPTTP). Against this backdrop:

BRI links 63% of the world’s population from 65 countries, accounting for 40% of global trade. To facilitate this massive project, the Chinese Government has committed billions of dollars on infrastructure-related projects in BRI countries.

This session will discuss different approaches for coordinating and working with suppliers and strategic partners in the context of BRI, and strategies for aligning the incentives of the different players throughout the supply chain to develop successful collaboration relationships.

Given the opportunities and challenges, how do businesses develop stronger business, distribution and logistics networks within Southeast Asia and the region?

It was a legendary trading route that for thousands of years connected Europe with Asia, and ancient Rome with Ancient China. Known as the Silk Road, it stretched through some of the most rugged terrain in the world 2000 years ago.

Now modern China is building a new Silk Road. The New Silk Road, also known as the One Belt One Road plan, is a hugely ambitious initiative launched by President Xi Jinping in 2013. It will link up over 65 countries and 4.4 billion people. That is about 60 percent of the world’s population.

Channel NewsAsia’s documentary team has travelled across the globe to 7 regions to investigate what the Silk Road means for individuals, companies and countries. The epic journey will take viewers from the future ports of China to naval bases in the Philippines, to safaris in Africa, wushu schools in Iran and ghettos in Greece.

The program received an Award for Best Documentary (International Affairs) at the New York Festivals.

The session will discuss the roles played by the Governments, trade/business associations, as well as businesses in facilitating flow of trade, goods, services, and people along the BRI. What are some of the approaches and facilities available in organisations which serve as a bridge that enable businesses and individuals to benefit from the BRI?

According to the Google-Temasek e-Conomy SEA Spotlight 2017 South-east Asia’s Internet economy will hit US$50 billion (S$67.6 billion) in 2017 and will potentially exceed US$200 billion by 2025. Investments in Singapore-based companies like Grab, Lazada, and Sea Ltd. bolster Singapore’s position as Southeast Asia’s financial and tech hub, but the report also highlights the challenges that these companies faced, namely shortage of local, homegrown talent, particularly in senior engineering roles. Against this backdrop, what are the opportunities for Singapore businesses? How to overcome challenges? What should Singaporeans do to better prepare for the future opportunities created by the rapidly growing Southeast Asia’s Internet Economy?

Theme: China’s Belt & Road Initiative: Opportunities in ASEAN
With a huge market of US$2.6 trillion and over 622 million people, ASEAN countries have become important partners for China’s Belt and Road Initiative (BRI). Deepening of economic ties and trade relations between ASEAN and China have also brought about major construction and infrastructure projects in the region to improve connectivity between ASEAN and China, South Asia, Central Asia, Europe and so on. As ASEAN countries further strengthen their economic integration and contribute to the global value chain, there are many new opportunities for businesses in the region to work together to tap on projects related to BRI. Panel of distinguished Ambassadors and High Commissioners:

The above rates are for Singaporeans and PRs, limited to 200pax (on a first come first serve basis). Terms and Conditions apply. Fees for non-Singaporean/PR = S$520 before GST – Please contact us for special rates. Fee includes basic seminar package, lunch and tea breaks.

*Fee covers refreshments, lunch and conference materials. Other expenses, accommodation and travel-related costs, are not included in the programme fee. Participants are responsible for all travel and visa arrangements. HCS reserves the right to change the date, venue, programme, speakers and fees due to unforeseen circumstances. Terms and Conditions apply.

For speaking and/or sponsorship opportunities at the Forum, please contact Jeffrey at 66038140 or email to jeffrey@hcs.com.sg 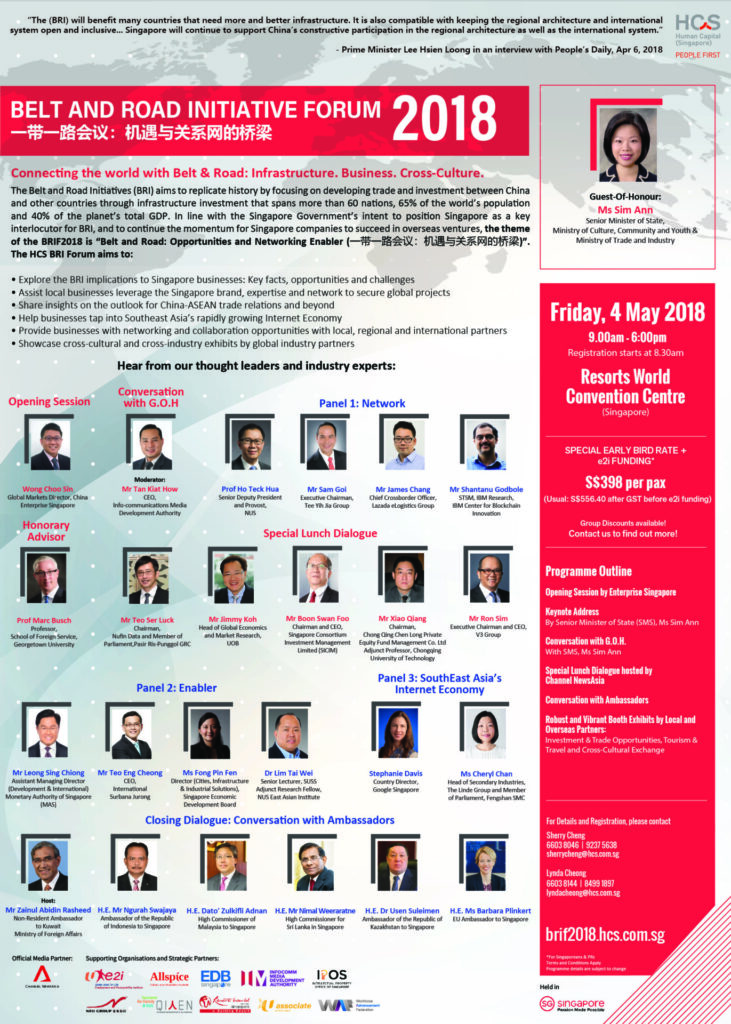 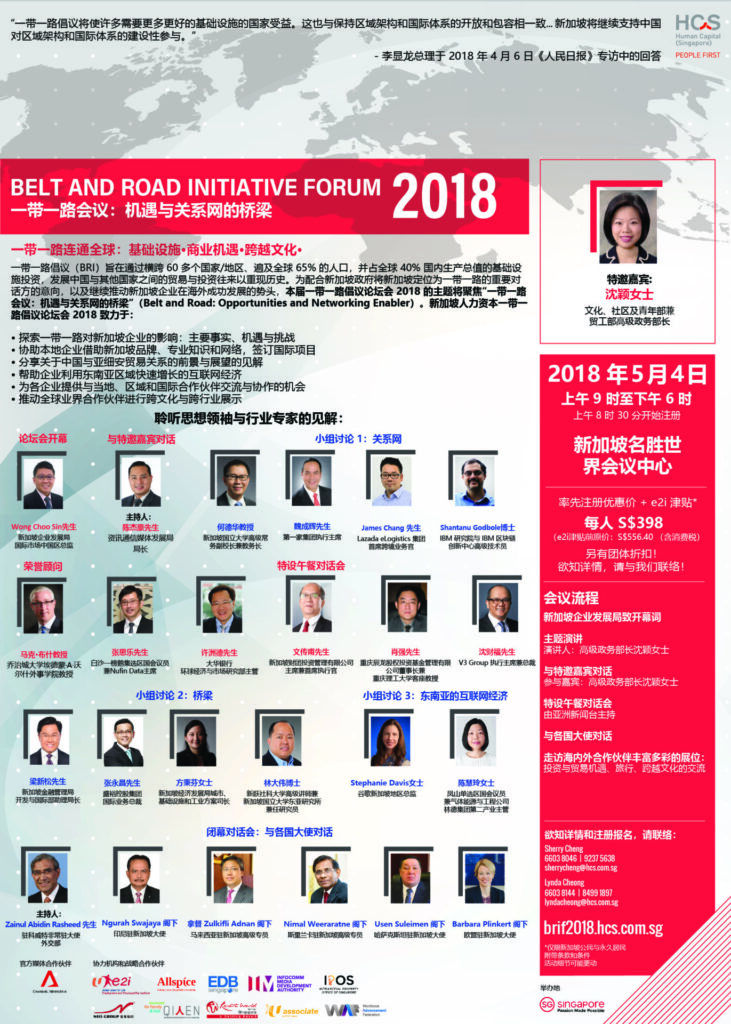